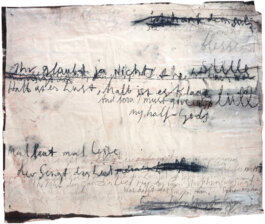 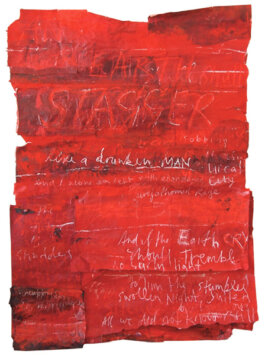 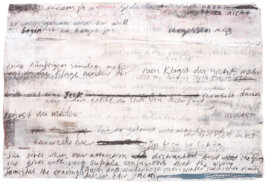 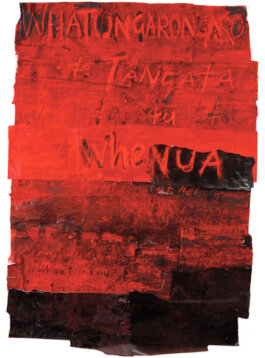 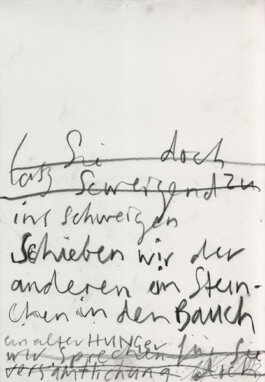 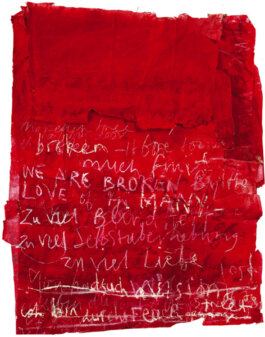 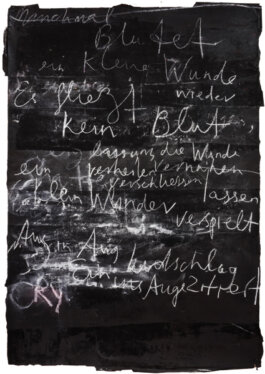 Angela Dwyer (1961 New Zealand) studied Fine Arts in New Zealand and Australia and has been living and working in Berlin since 1984. She was Guest Professor at the Munich Academy of Fine Arts 2009/10 and is a Lecturer at the Institute of Design Berlin. She works in various art mediums and has had many solo and group exhibitions in Germany and throughout Europe. In 2013 her Installations were in the "Colour Room Colour" exhibition at the Georg Kolbe Museum Berlin.

Today, handwriting in itself suggests an intimacy between the artist and the viewer. Words in art are open to the wealth of references, whether intellectual or personal that anyone wants to project upon them. The placement of words in Angela Dwyer's work is just as relevant as their colour or their meaning. By removing words from their context and presenting them as pictorial elements, they are brought into the realm of drawing. Angela Dwyer plays with ideas and methods of distortion, as she mixes lines from one poet with another, crosses out words, and puts various languages together. A moment of discourse is created between the words of others and the artist's expressive signature handwriting as drawing.

The original Maelstrom (described by Edgar Allen Poe, Verne and Melville as a huge Vortex) is the Norwegian Moskstraumen, a powerful conjunction of high amplitude tidal currents with a legend concerning greed, power and magic. But in many languages 'Maelstrom' is a synonym for chaos, for the inescapable and the emotional; our powerlessness in the face of the forces of nature or "acts of God".

Angela Dwyer's work, in mediating between text as image and image as text, realizes and celebrates private moments of our human existence in a rapidly changing world.