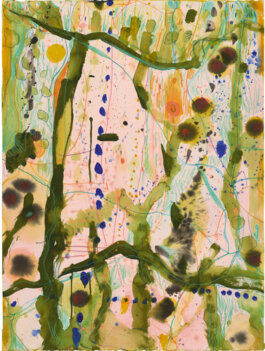 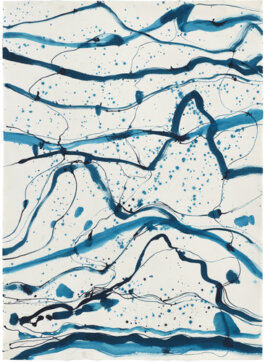 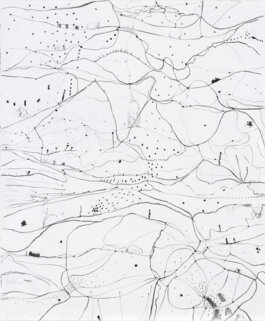 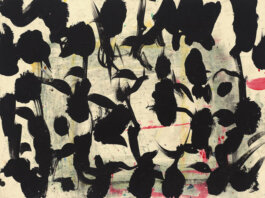 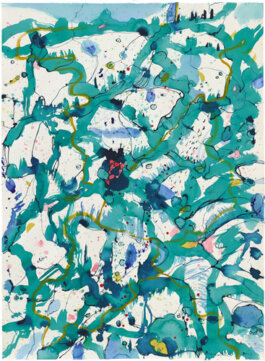 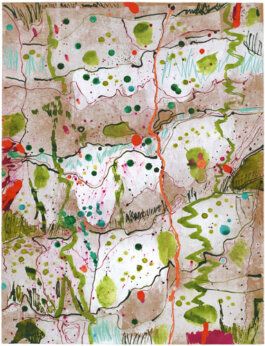 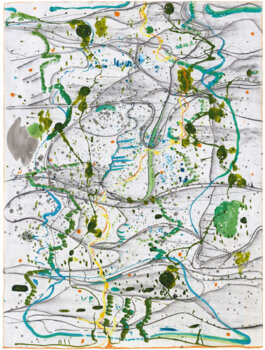 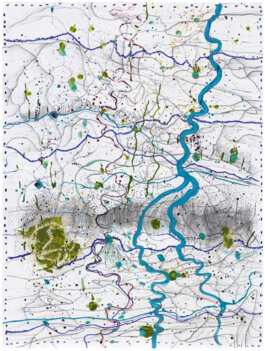 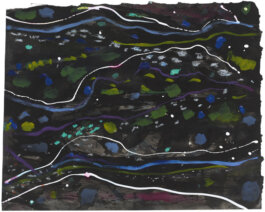 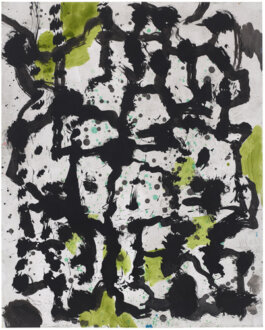 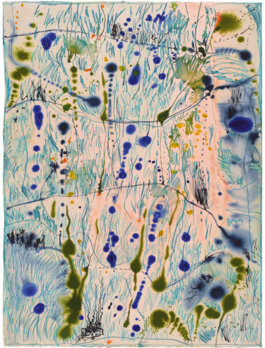 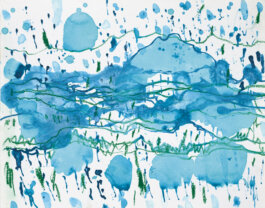 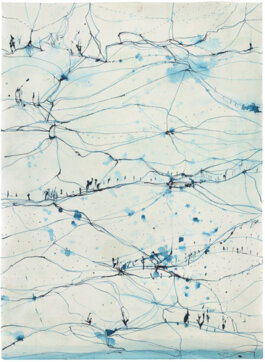 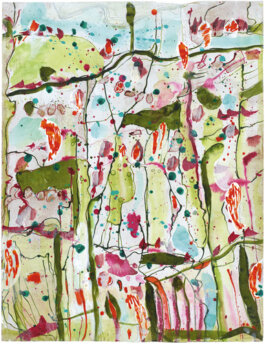 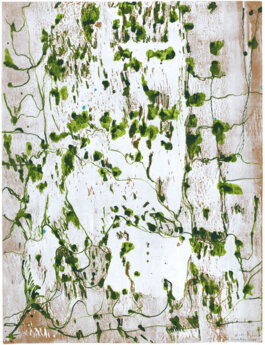 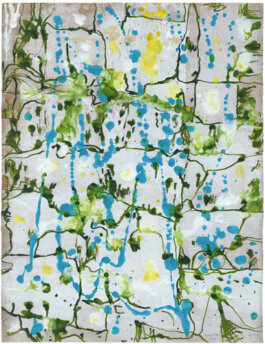 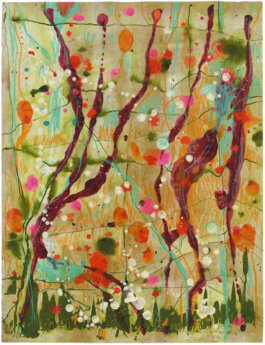 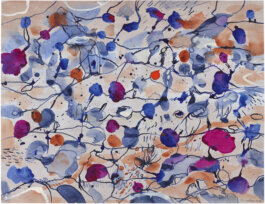 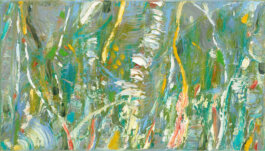 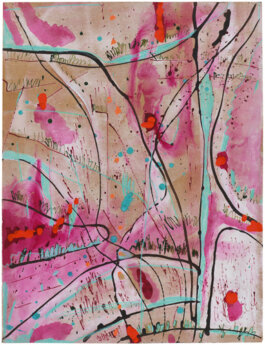 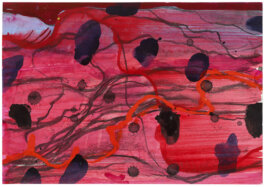 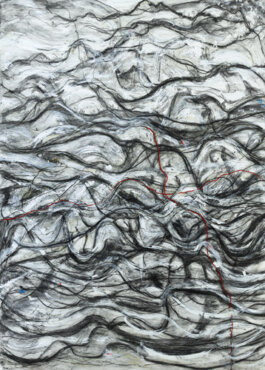 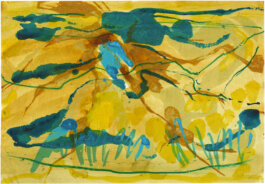 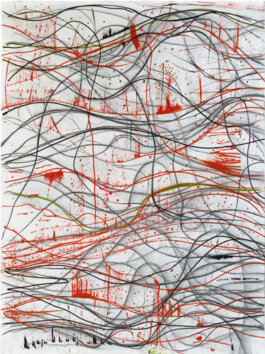 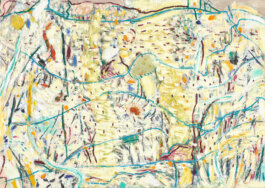 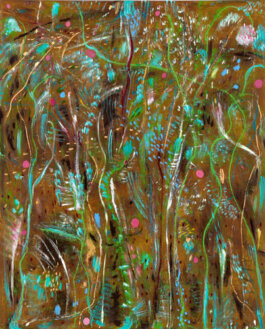 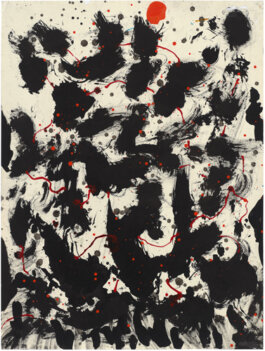 There is more to the word "becoming" than one would first expect from its two syllables. The Duden dictionary writes "Expresses something in the future". And: "Indicates an assumed event". Hegel described "will" in his dialectical logic as the unity of Being and Nothing.
Being and nothing? In the new series of works from BieneFeld, in which she combines painting and drawing under the title "Becoming", there is initially plenty of "being". The pictures are, they are memories of landscapes, without depicting concrete landscapes. They are, especially in the works on paper, which are created more spontaneously and experimentally than the paintings, composed of an intersection of fine lines, horizontal and vertical, which stretch a curved mesh over the paper base, flanked by splashed points and rivulets of Paint which have run in the water. They are abstract, they lack any trace of people, objects, or forms. Nevertheless they appear like natural equivalents, the lines that the sea traces with its waves, hilltops and staggered mountain peaks, footpaths between fields, tracks in the snow, the course of a river, or a section of map in which altitude lines, streets, and hiking paths cross. The drawings exude a feeling of contemplation and reduction, as familiar from Asian works in ink. Every line is exactly right, not one too many or too few, every coloured spot sets an accent at precisely the right place in the spirit of a balanced harmony. Every drawing is the expression of a different perspective. Sometimes an aerial photograph, sometimes a wide angle, sometimes a close up.

When she returns from a journey she always begins with the charcoal drawings, "so that it comes out," relates BieneFeld. As if she retraces the paths she has walked which have inscribed themselves in her memory like a map. As if she gazes once again into the expanse, where mountain rises behind mountain, line behind surface behind line. The journeys are fundamental, not just for her work, but also in order to simply be, in order to gain a new perspective on things. When it is there, when the memory in the unconscious has become a form, she devotes herself to painting, sometimes in parallel. In contrast to the drawings, which don't always have to become something, which can also be laid aside without a result, the oil paintings on canvas are always produced with the intention of becoming a picture. But BieneFeld never knows what the picture will be like in advance. Where it develops, which colors it will receive – one could also say with respect to the latest pictures with titles such as "Garden", "March", "Garden Path", where it grows – is left up to the picture itself to an extent, and the path that it takes.
For the last three years BieneFeld has not just been travelling and walking through nature, she has also cultivated her own garden. "That makes itself felt," she states. And in point of fact her recent pictures now appear to have been painted from out of the green, the plants and the earth. At any rate, they demonstrate a far more intimate and direct gaze compared to her earlier pictures, which tend to observe from a distance. Sometimes an aspect of a drawing also reappears in the painting, whether it is the relationship or the contrast between two color tones, a direction, or a mood.
The oil paint stands spotted and pastose on the canvas, like layers of plaster on a wall, like a pullulating garden in which grass and flowers grow chaotically intertwined. Red shimmers through the light green and light pink of the flower-like spots in the foreground, as if the summer sun was shining through the grasses. In the small-format "Summer 1" (Summer 1) the pink-red light, which can only be observed on summer evenings, has now completely taken over the background. The warm colours could be the remnants of her last journey to New Zealand, says BieneFeld, where she spent the summer, our winter.
Every landscape has its color, every country has its own light. On the Baltic Sea coast, where, – alongside Berlin – she lives some of the time and can gaze out at the garden, the sea, the rich green of the Darss Peninsular, and the white of the beach each day, her pictures have become much more abstract, she adds.