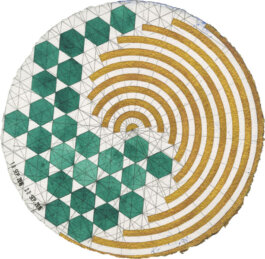 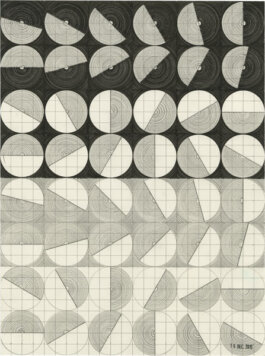 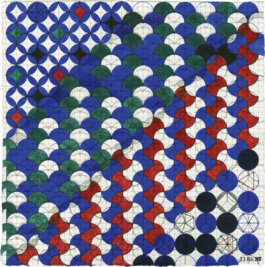 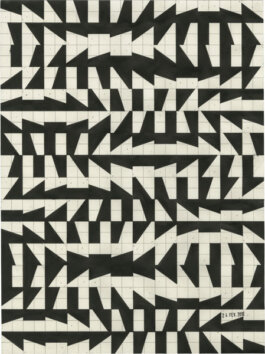 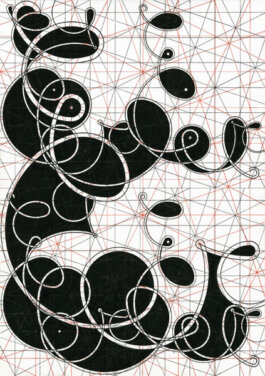 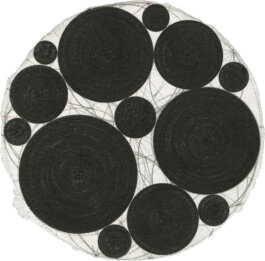 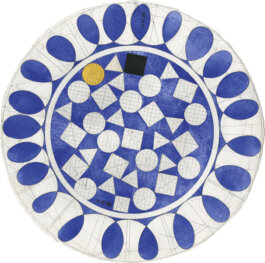 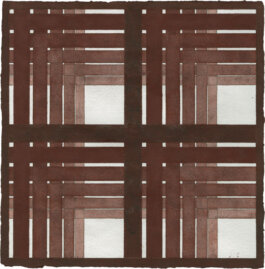 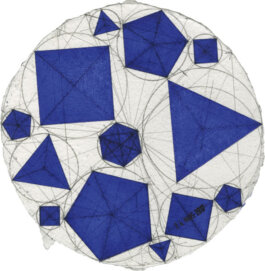 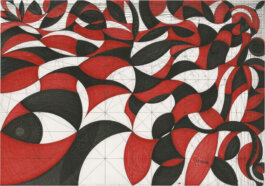 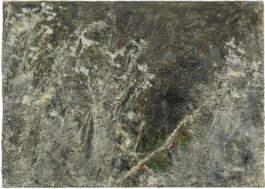 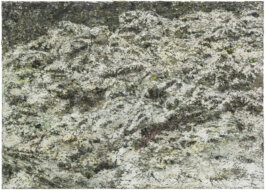 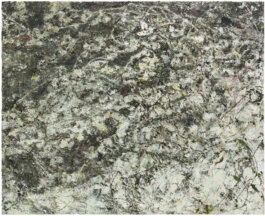 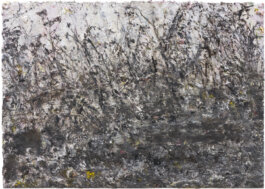 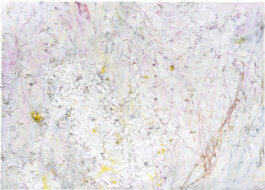 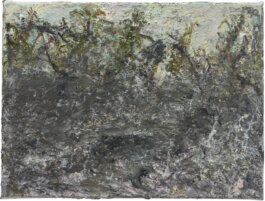 The artists brought together in this exhibition have quite different approaches to painting, for instance when it comes to their treatment of space and to their use of the illusionistic possibilities of the medium. Yet a direct visual appeal is important to all three of them. First comes perception, and only after that one can think about the different ideas, motifs, or worldviews that are implied in the work.

When I visited Henri Jacobs in his studio in Brussels, he showed me a painting, several meters long, with two doors. The doors are actually real doors that could be opened, which made it a painting with an entrance and an exit. Jacobs has also challenged the illusion of depth in other works. By cutting through the canvas and making patterned holes or squares, he brings the backside of the work to the front of our attention. Actually, this cutting can form the main compositional pattern of a work.
Currently though, it is not so much painting that keeps the artist busy, but drawing. In this exhibition, there is selection of his extensive drawing production over the years. For Jacobs, making drawings is like keeping a diary. It is a daily practice, for pleasure, out of necessity, to research, to see, and to understand. The quantity is part of the quality, as it is interesting to see how certain motifs develop and unfold through different paper works. The size of the paper is usually small, something easily done on a table. Jacobs’s focus seems to be on a certain dynamic he wants to capture: change becomes visible through repetition and variation in a sequence of works.
The vocabulary is formal and structural. The artist finds out how circles, squares, and triangles work together, and what happens if you multiply them. A number of drawings show circles, creating the illusion of holes. They remind viewers of Jacobs’s earlier cut-outs, although in the drawings, it is all strictly illusion. There seems to be a mathematical, rational soul at work, if you consider the serial aspect, the precision of the exercises, and the tools that have been used. Yet the process is intuitive in the sense that the artist just starts drawing, and then sees where it takes him. The compositions are the result of action, not of predetermined ideas or designs.
It feels like Jacobs is trying to exhaust the possibilities of a motif, to the point of saturation. Then a new motif can start. In his book Journal Drawings, which contains hundreds of works on paper made between 2003-2012, the extent of this project becomes clear. The book gives insight into a way of seeing that coincides with a way of living. The drawing practice comes across as a daily confirmation of life, of celebrating perception. It stands for focus, curiosity, and attentiveness to what visual reality brings us. And to have this kind of attention, one does not necessarily need a subject to talk about. It is all there, in form.

Reinoud van Vught is interested in creation. For him, painting is a universe that develops parallel to nature, listening to similar principles. Just as a flower springs from a seed, a painting can spring from a single blot of color. This is most clear in his gouaches; they show natural motifs as they unfold. The fluidity of the process can be felt, the dynamics of something that grows and finds its way, curving around obstacles by itself, like a river. Yet one also has to acknowledge that the motifs do not look entirely natural. They look like creatures, something living, but not necessarily an existing plant or animal–it could also be mutated life.
Van Vught is clearly driven by beauty; these watercolors can only be made by somebody who believes in life. But the artist is equally interested in dark scenarios: What will happen when life on earth is over? What kind of life would reappear after a nuclear catastrophe? He likes to imagine growth as it happens after things have stopped.
In Van Vught’s paintings on canvas, the figuration is less defined. Colors keep the works close to the landscape, or transmit a feeling that the motif is derived from nature. The forms grow more abstract and geometric, and they become solid through layering, many parts painted over. While the gouaches are full of air and chance, the paintings create closed and controlled spaces instead. In terms of color though, they are bright and festive, expressive and they celebrate the surface of things.
During a studio visit, the artist showed me some small paintings with horizontal layers, each with different color patterns. In my perception, they balanced between a play of geometric forms and an abstracted landscape with a horizon. The artist took one of the paintings from the wall and turned it upside down, and another landscape appeared–a different one, but using the same horizontals for its build-up. This somehow indicates the sovereignty of the works, and also where Van Vught’s research is directed. It is about creating a painterly surface that causes friction with an illusionistic space, just as it is about creating forms of life that derive their power from friction with nature. As he noted, “They are not flowers or plants that I paint, they only look like it. It is not a narcissus or a rose, you just have to think it could be.” It is the principle of nature–the process of birth, growth, flowering, and dying–that inhabits these works, more than the aim to depict natural motifs.

The paintings of Han Klinkhamer offer a double take on landscape. There is the view of the land, the painting as a window that presents us with a horizon, a sky, and contours of trees, bushes, or flowers. Simultaneously, each painting is itself a kind of rough structure, where a lot of attention has been put into the texture–it feels like a close-up of a surface, a slice of nature. Those two perspectives–far away and close up–are combined, without creating problems in adjusting focus. You could also say that the works combine a mental image with a material, physical take on the reality of landscape.
The artist lives in a village immediately behind a dike at the Maas river. He just needs to walk up the dike to see the water, meadows, and moving skies. Yet, it does not really feel like his paintings depict this outer world that is available at his doorstep. True, his work is about nature, and his daily encounter with the elements is undoubtedly important as a framework. But the real landscape only forms itself in the studio. And here “real” means: the landscape as it can be created and evoked in paint. Sometimes it looks like the stem of plants or grains of sand are mixed through the paint. But it is all painted, an illusion created through making the paint thick or scratching it off with a sharp tool.
This work is about transformation, from nature into paint, and what it takes to do so in a way that is authentic and credible. Klinkhamer restricts himself in terms of color. He seems to almost hide his color inside the motifs. Is it because the Dutch river landscape around him has such a reduced palette? Hardly. The color is defined in the studio, in the head of the painter, in the image he wants to create, the truth he wants to follow. There is a main ground, often either black or white, and then there is the possibility of color coming through–usually just a little, as if we are witnessing the moment when things receive color, when the sun sheds its first light, so that we can distinguish some green in the black, some pink in the white.
Is this painting speaking of enjoying nature? Maybe so, but there is also clearly effort and battle involved, pushing and pulling. “Every time,” the artist says, “you have to start as if it is the first one.” There is not just the outside world in the works, but there are also internal landscapes, moods, and convictions–without words, but still very much part of the paint.