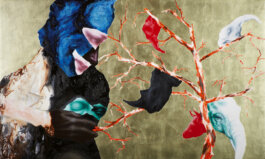 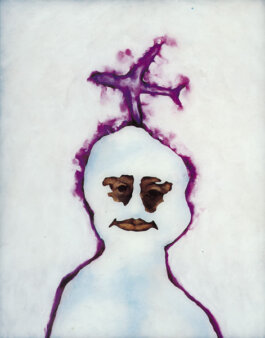 For about twenty years, Daniel Schlier has worked in series. Each of these series has been created over several months or years, until the subject is fully exhausted. They bear descriptive titles such as «Maternities», «Heads», «Melodramatic heads», «Thinking dogs», «Thinking mountains», «Modern landscapes», and so on.

With the pragmatic and literal style of a researcher cooly observing selected chemical reactions, Schlier brings together various figures from a large register of images.
The common link among his works relates to the arrangement of figurative elements taken from reality and most often painted from photographs after an initial phase of preparatory drawings. He incorporates other materials, like beads or handkerchiefs, directly. This gives common objects surprising figurative functions that then take on new, unexpected, and bewildering life.
The first effect of Schlier’s painting is to make the visible much more twisted than it seems, to show its strange and disquieting side. He establishes a universe made of expressive heads and assemblages, in search of thought and soul, but wich, like phantoms, bear the hilarious stamp of disaster. In his figurative constructions, the representation of humans is vacant or, more specifically hollow. These are meticulous inquiries into the relationship between representation and reality, between thought and figure. Attentive to the presence of the imaginery in the perception of the real, Schlier seems curious about how our relationship to the appearences contracts and expands.

He is interested in the rifts that exist between consciousness and vision and investigates the way the real is approached, how it is constituted, and how we perceive it, wich is to say, how we think of it. He seems to take pleasure in optical phenomena, commonplaces of imagination, and the transposition of the human world onto that of animals and objects.
His most recent series shows that reality, seen from a certain angle, can be so charged as to become allegorical.
He is interested in the way silliness rubs shoulders with greatness, and observes the homogeneity of the material that makes up images, the Shakespearian «such stuff as dreams are made on».