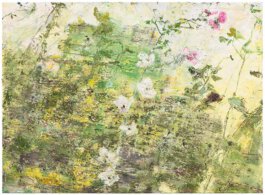 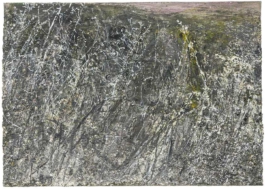 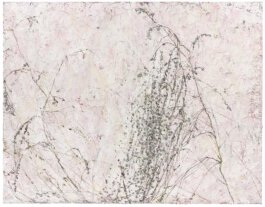 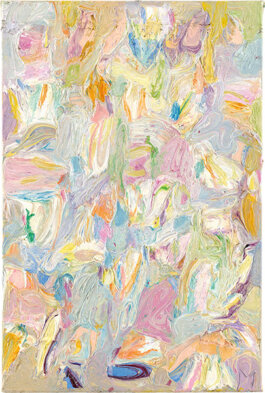 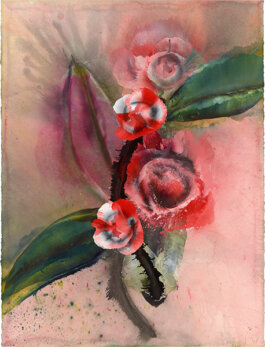 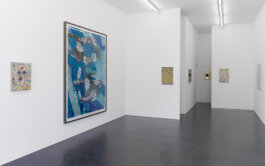 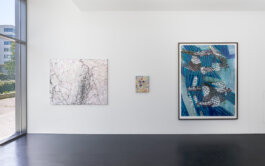 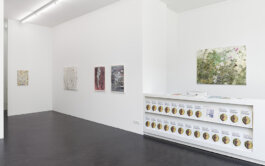 In the 17th. The Dutch landscape becomes emblemared in the 19th century, the Golden Age, when the Netherlands experienced an unprecedented cultural and economic heyday. Instead of symbolic representations of Italian idylls, which serve primarily as a backdrop and background for biblical scenes, nature in front of the window comes into the view of the artists, rivers, banks and fields become the scene and sole subject. It will take another 200 years before the artist's studio itself pushes into nature, the painting "plein air" becomes possible through the invention of paint in tubes. The three artists from Holland, who come together in the exhibition "In The In-Between", have naturally internalized these art-historical traditions, a present-day form of landscape painting is inconceivable without the awareness of their development.

How can nature be captured in the painting? Han Klinkhamer's painting revolves around this question. His work begins "plein air", in nature, with a view of the dike in front of his studio on the Meuse, but this first encounter does not serve as a recording, which is then banished to the canvas in the studio, but rather as an attunement and thought. His paintings show nature, and sometimes landscape, but rather as a fragment, as a detail, as a section rather than a panorama. In the crusty, relief-like layers of paint, the blades of grass and flower stems appear as if they were pressed into the wet color and preserved, motif and surface are inseparably connected. In fact, after several monochrome layers of primer, the artist scratches out the stalks and grasses again, in an almost sculptural moment within the painting. The surface itself acts as a natural surface, like a furrowed field, dry moss or tree bark. By partially blurring the layers of paint in the background, he gives his paintings a moment of movement. A fleeting moment, a quick look at the weeds on the side of the road, which deserves its place in the image memory just as much as the beautiful, perfect landscape.

The impression of a moment also determines the paintings of Marc Mulders. His virtuoso images, full of the movement of the brush and the color, are impulsive transmissions of nature in action, as Mulders sees them every day just outside his studio. Its working space is an old stable surrounded by flowering meadows and fields, where a different natural spectacle can be imagined at any time of the year. One seems to feel the roar of the bees, the sound of the wind between the leaves, the scent, the over-, side- and confusion of nature with all the senses in his pictures. Bodies and shapes sometimes emerge from the initially completely non-objective swirls of colour, which is reinforced by the associative titles of the images. Thus the Flower Skull rises, a hinted face from the confusion of color spots, while one has to search the Green Man in the work of the same name longer. Everyone sees something different in nature, whether in formations of clouds or seas of flowers. Mulder's painting is openly committed to its borrowings and inspirations of Impressionism, in his own private Giverny, as he titled a past exhibition not without a humorous undertone, he enters into a dialogue with the great masters of modernism – and with the masters of nature.

In Reinoud van Vught, the nature and the forms it produces serve as a stimulus rather than a trigger for a painterly process that takes place in every image. At the beginning there may be a single color patch, a shape that looks as if it were a petal without wanting to be a certain sight. Reflections on the composition of color and shapes in pictorial spaces go hand in hand with moments of chance and surprise, when the watercolored surfaces in the background take shape and spread into the pictorial space as if the plants were growing in the images. When van Vught switches from small-format watercolor to the large paper and canvas works, the opposite is done in the picture, as if he were subjecting his motifs reminiscent of plants to a microscopic look and working out their details. Hatched, striped, geometrically patterned color surfaces overlap, the front and background dissolve, transparent and opaque elements alternate. But even these graphic forms can be traced back to nature, to the geometry found in stems, leaf veins, seeds or cones.

As different as the approaches to dealing with nature and what is created are – Han Klinkhamer, Marc Mulders and Reinoud van Vught meet in a space between nature and landscape, form and surface, abstraction and figuration, memory and construction. In The In-Between.