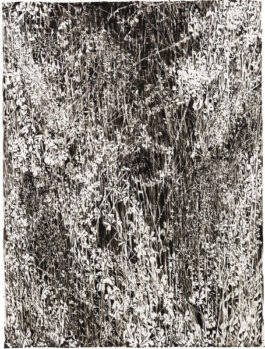 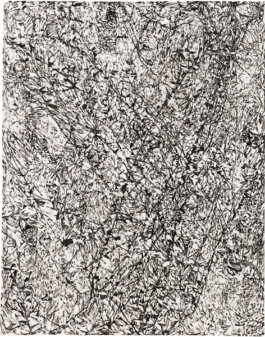 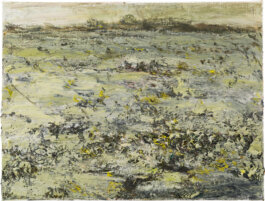 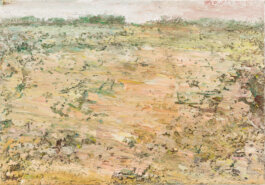 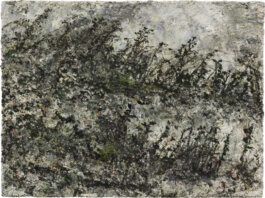 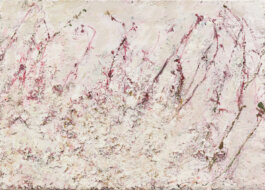 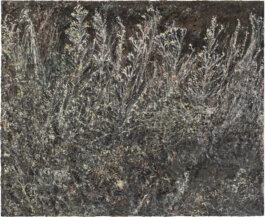 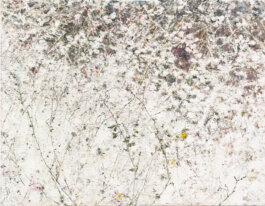 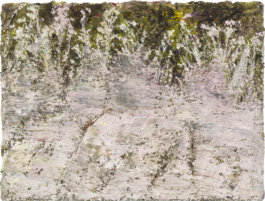 The works on canvas, as well as those on paper, showed fragmentary impressions of shrubbery, plants and grasses. Sometimes they concentrated around a number of powerful main shapes, but mostly they merged into wild whirling of dabs of paint or criss-crossed lines and leaf patterns. The works on paper mostly existed of several layers of paint. Some were initially completely painted in black, after which the artist scraped and cut into the thick paper with a sharp knife, so that white shapes appeared. In his need to penetrate into the paper he often went so far thatdeep holes were created, which he consequently covered by gluing other sheets of paper to the back. And so layered painting on paper came into being with form structures in black and white, which produced a very vivacious, sometimes almost vibrate, three-dimensional mosaic. The continuing diversity of positive and negative lyrized picture fragments constantly put focussing on the proof and made experiencing these paintings into an interactive adventure.
In the large paintings Klinkhamer followed the procedure of applying material,scraping it away, filling up the crevices and painting over then again. From nearby it looked as if the had spread fat daubs of paints, endlessly and seemingly at random, all over the canvas until they coagulated into a thick of paint. From a distance the vegetative impressions seemed to disentangle themselves slowly, and when the diffuse light from outside brushed along the pockmarked coats of paint, portrayed nature even seemed to come alive. During my engrossed observation the thick coats of paint slowly dissolved and then I merely saw how light and shadow played together in the dense shrubbery.