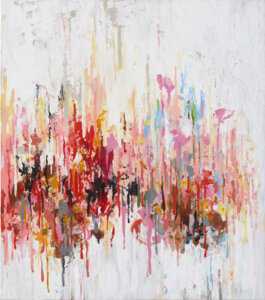 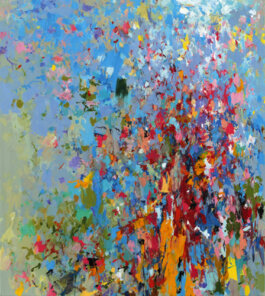 The Colour of Concrete

An intersection in a pulsating city. People wait until the stream of cars stops for a brief moment and a gap opens up, allowing them to cross the street. Two people meet at the side of the street, a couple cast elongated shadows on the wall behind them, illuminated by the light of the car headlights.
Maybe it was these observations which Uwe Kowski made in his daily life, passing through the streets of Berlin on his way to work in his studio, that inspired his new series of works and the titles of his paintings.
Following the garden which Kowski exhibited in his last exhibition at the Galerie Born, his gaze now remains focused on the city, on the things he encounters and surround him – streets, intersections, concrete. However the picture of grey, of cold stone, grids, and angular forms which these words conjure up before one’s inner eye have nothing in common with what Kowski makes of them in his paintings. Quite the opposite, the grey is repeatedly overlaid with a rich blue in all its shades, mixed with red, pink and turquoise.

The pictorial ideas that precede Kowski’s work flash for an instant when he paints, memories of something seen; a street scene, groups of people, and city views appear briefly in his mind and are given material form in layers of paint, strokes and dabs of the brush, implied contours and contrasts. He seems to be especially attracted to shadows, shadows of people, elongated and cast on the ground to create abstract, distorted silhouettes, coloured shadows which appear to be carved into the canvas, Kalte Schatten (Cold Shadows), as one of the picture titles reveals. This is especially clear in the picture Beton / Schatten (Concrete / Shadows) in which variations of grey dominate the palette of colours. If one looks at the picture from a distance one can see the silhouette of a torso mirrored in the lower edge of the picture, with the grey congealing to form a dark dabbed mass of paint from which the shadow breaks free. At first glance the painting stands out from the usual the colourful palette, as if a grey veil of rain has forced its way between the bright summer days. However, on taking a closer look the blue, yellow, and pink dabs of paint which appear to dissolve the grey, letting in the light, can also been seen here. And thus, on closer inspection, the impression of a grey, dismal urban landscape reveals spots of colour – one only has to want to see them.

“A shadow is neither black nor white. It always has a colour. Nature only knows colours”, stated Auguste Renoir in 1910. And so it is with Uwe Kowski’s pictures. Grey is never just grey, but yellow, pink, and blue. The black which, here and there, has found its way into one of the pictures, repeatedly dissolves into grey or ochre, never appearing hard, at the very most deep. Uwe Kowski does not need the colours of nature, gardens, plants, or landscapes, he finds enough of them in the urban space, the process of composition is the same. Real materials are transformed into pictures, the experience of painting is always in the foreground, not the depiction of a motif. His urban landscapes are less representations of spaces or perspectives but attempts to organise colour on the canvas, to place light next to dark areas, generating sensations through the combination of different colour tones. Kowski is a cognoscenti when it comes to modern painting’s use of light, arranging Pointillist dabs of paint next to each other in a sophisticated contrast composition to illuminate his pictures.

The experience of painting also includes the capturing of movement. Uwe Kowski’s pictures are characterised by an inner dynamic which sets them shimmering and flickering, like glints of light flashing on the surface of water, or spots of light cast on the ground through the leaves of a tree. So maybe nature is still present to an extent, but more as a memory than an image.
Sometimes it appears as if the colours follow an outside force, a trigger, an instant of motion, fixing it on the canvas. While the silhouettes in Gruppenbild (Group Picture) all gather at an imaginary point in the lower third of the picture, as if attracted by gravity, the blue rays of colour in Kalte Schatten fly onto the canvas from a point outside the top of the picture, as if they were literally thrown onto the picture from a light source.

The experience of painting which the artist aspires to could be translated into the experience of seeing for the viewer. Uwe Kowski does not set out to narrate anything with his pictures, to capture or document any stories, to paint portraits of people or compose spaces. In every picture he inscribes an idea which he has formed on the basis of something seen, leaving it up to the viewers to make their way through the pictures, to enter the maelstrom and re-emerge at a different place. Maybe they will encounter the idea which forms the basis of every picture, or maybe a new one will emerge, whereby the titles can provide an initial impulse, stimulating one’s own memories which superimpose themselves on those of the artist.