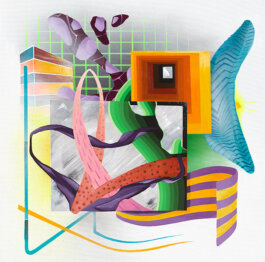 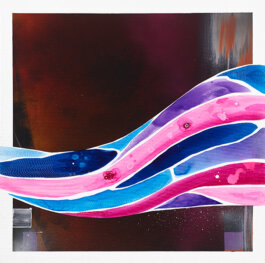 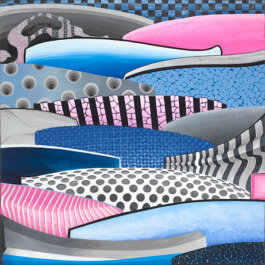 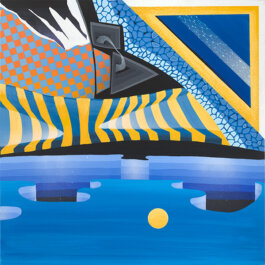 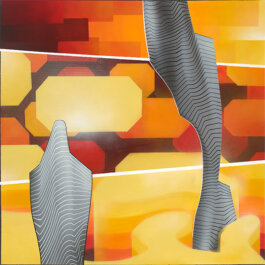 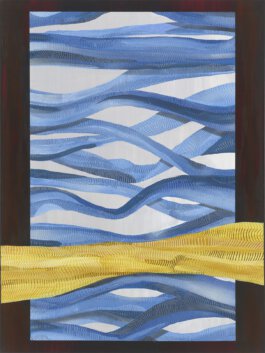 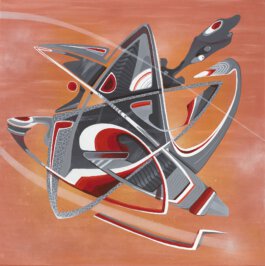 Graffiti is the art of making a word dance

While friends were going to house parties, Emil Bienefeld was making words dance.
Graffiti is the means of expression of the then 12 year old illegal writer. Emil marked Berlin’s urban landscape, continually looking for the kick with the colored letters.
Then he became the father of two daughters and assumed responsibility for a small family. It is broad daylight. Emil, now 36 years old, has invited me for a talk in the studio “Grishaus” in the Schöneberg district of Berlin. He holds a reusable coffee-to-go cup in his left hand and strokes his short dark blond hair.
With exquisite politeness he asks whether he can continue working on his painting while we talk. He stands in the corner of the studio space and smiles to himself. Perhaps he is quietly amused at astonishing his visitor. The urban artist has exchanged subway tunnels, trains, and forbidden house walls for canvas and easel.

He has rented a space in Grishaus, the studio of the Berlin-based artist Gris, in order to pursue his passion legally. Painting on the street always meant stress and time pressure. Suboptimal conditions for Emil, a center of calm, but not the reason why he has left illegal painting behind him. Becoming an adult intervened. The canvas in the studio now bears gentle, grey pencil strokes, while he wears black jeans and a black Jack Wolfskin fleece jacket. Inconspicuous, colorless, quiet. That is the way Emil is. In contrast to the loud Rap music in the background and the bright colors he applies to the canvas. The spectacle wearer, dressed in black in the middle of an ordered chaos of countless Molotow spray cans, acrylic paints, brushes, and paint rollers.
Here, between the cultivated walls, he feels at home. The satisfied expression betrays that he is in his favorite place. Emil grew up in an artist household. First in Leipzig, then in Berlin Schöneberg. His mother’s tools of the trade, the painter, are Emil’s toys. And it is also here that his passion has its roots. It has now got colorful in Grishaus. In the bright rooms one can hear the hissing as the paint escapes the can.
The paint conductor Emil lifts his right arm and traces a vigorous arching brushstroke in ocean blue over the prepared canvas. The sketches are made at home, in the basement half room of the 2.5 room apartment. In the “cellar” Emil develops his ideas, while always remaining true to himself: Graffiti elements in all varieties. “You have to have a good imagination if you want to transfer the little sketches onto a canvas measuring one meter by one meter!” You also need imagination if you want to gain a picture of the graffiti scene. One knows very little about the writers whose mystical symbols shape whole metropolises. Who is behind it, who are these creative minds?

And is what they do vandalism or art, or perhaps both? For Emil it is art. For him it is the state of his soul and the means to give his thoughts a line. With the exhibition TRIP in the Projektraum Heiddorf Emil has finally realized what he has long dreamed of: being able to legitimately present his urban art. For the artist canvases mean freedom: No hiding behind a pseudonym and no worries that come tomorrow his picture could have been painted over by some janitor.