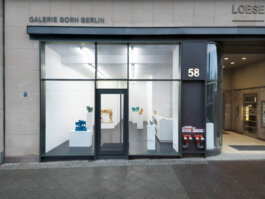 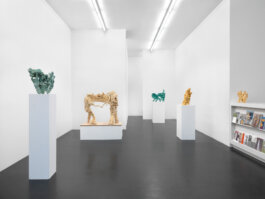 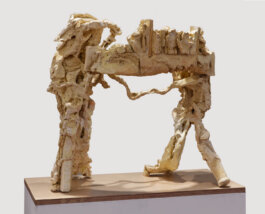 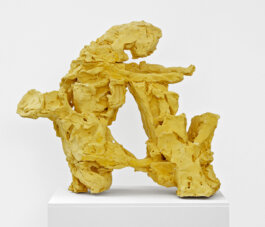 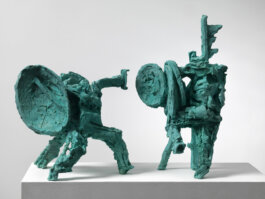 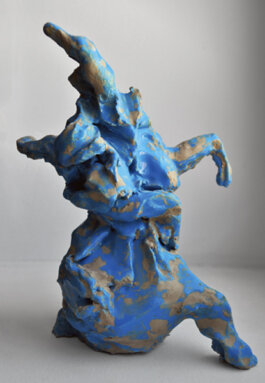 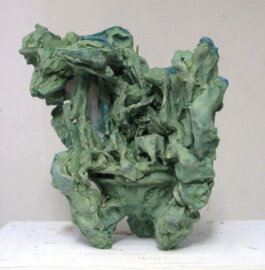 A tennis player reaches his arm high above his head; balancing in the air, bent backwards, every part of his body is prepared to focus all its energy on one forceful stroke of the racquet. Another tennis player has lost his balance and lies, defeated, on the ground.
Translating two dimensional sport photography, like the scenes described, into three dimensional sculptures, British artist Lucy Teasdale (*1984) explores the balancing act of bodies, forms and compositions. As a point of departure she uses existing images that already possess their own significance. She finds her inspiration in historical photographs and baroque motifs as well as images from newspapers and magazines. Based on certain shapes, patterns or dynamic movements in these images, Teasdale's sculptures emerge as abstract three dimensional forms with a language of their own.
By employing the composition of a flat image into her sculptures, Teasdale explores the consequences of bringing the background forward, or letting certain patterns be dominant. Similar to baroque sculptures, Teasdale is fascinated by the movement, energy and tension in certain images and situations. Her works have multiple optimal viewing angles, inviting the viewer to explore the work on their own. Often left untitled, Teasdale's pieces leave considerable room for interpretation despite their origins in a concrete image.
The sculptures develop as they are modelled. A continuous process only stopped by the final cast of the work. Teasdale uses a number of materials, such as bronze, acrystal and plaster to cast each monochromatic sculpture. In addition to this, the artist sometimes uses toys in her work which she then modifies; loading her works with references to literature or pop culture.
Balancing between figuration and abstraction, Teasdale's sculptures do, despite the ab – straction, contain some recognizable elements, giving the viewer, from some viewpoints, a taste of something familiar. These glimpses are however so fleeting that the works are constantly opening up to diverse interpretations.

Lucy Teasdale was born in Birmingham in 1984. She graduated in 2010 from the Kunst Akademie Düsseldorf under Professor Tony Cragg. She lives and works in Berlin.